To be an oracle is to be two-faced at once — a future speaker of retroactively translated tongues and a momentary, bewildering other beyond present comprehension. It is this contradictory unity that speaks in Masaho Anotani’s works, both spiritually and structurally, rendering him artwork and artist, guide and traveller, spirit and medium all at once. His art seems to be from the uncertain spatio-temporal dimension of dreams, as a memory of the not-quite past and as a prophecy of the not-quite future. (I say not-quite here not only due to the liminality intrinsic to Anotani’s practice, but also due to the deeply intimate unknowability to which the artworks and their artist are moored.)

In discussing abstract, highly symbolic art, it is the natural inclination of the audience to attempt interpretation, to provide translations into the languages we understand. But while this instinct may be natural for the viewer, it does not mean that it is right for the artwork, particularly when the object functions as a phenomenological souvenir of an extensive practice. To translate in the case of Anotani is to reduce his visionary journey towards infinity to the meagre dimensions of the canvas. To do such a thing is not the role of the viewer, for Anotani’s compositions are not reflective of himself so much as they are of the Dreamtime in which he finds himself.

A new shade of the Dreamtime was introduced to Anotani in November 2019, when he visited Central Australia as part of his residency with SHDW.Gallery. Under the guidance of Australian art curator Ken McGregor, Anotani became acquainted with a new corner of the Earth and its rich spiritual history through visiting sacred sites, meeting Aboriginal artists and communities, and immersing himself in the sanctity of Nature. Parts of his physical journey were documented by the accompanying video crew (Louis Mitchell and Damian Kane), and have been adapted into a documentary with a soundtrack by Anotani’s brother Mars89. SHDW.Gallery looks forward to sharing this work with you via Youtube on the 27th of November. 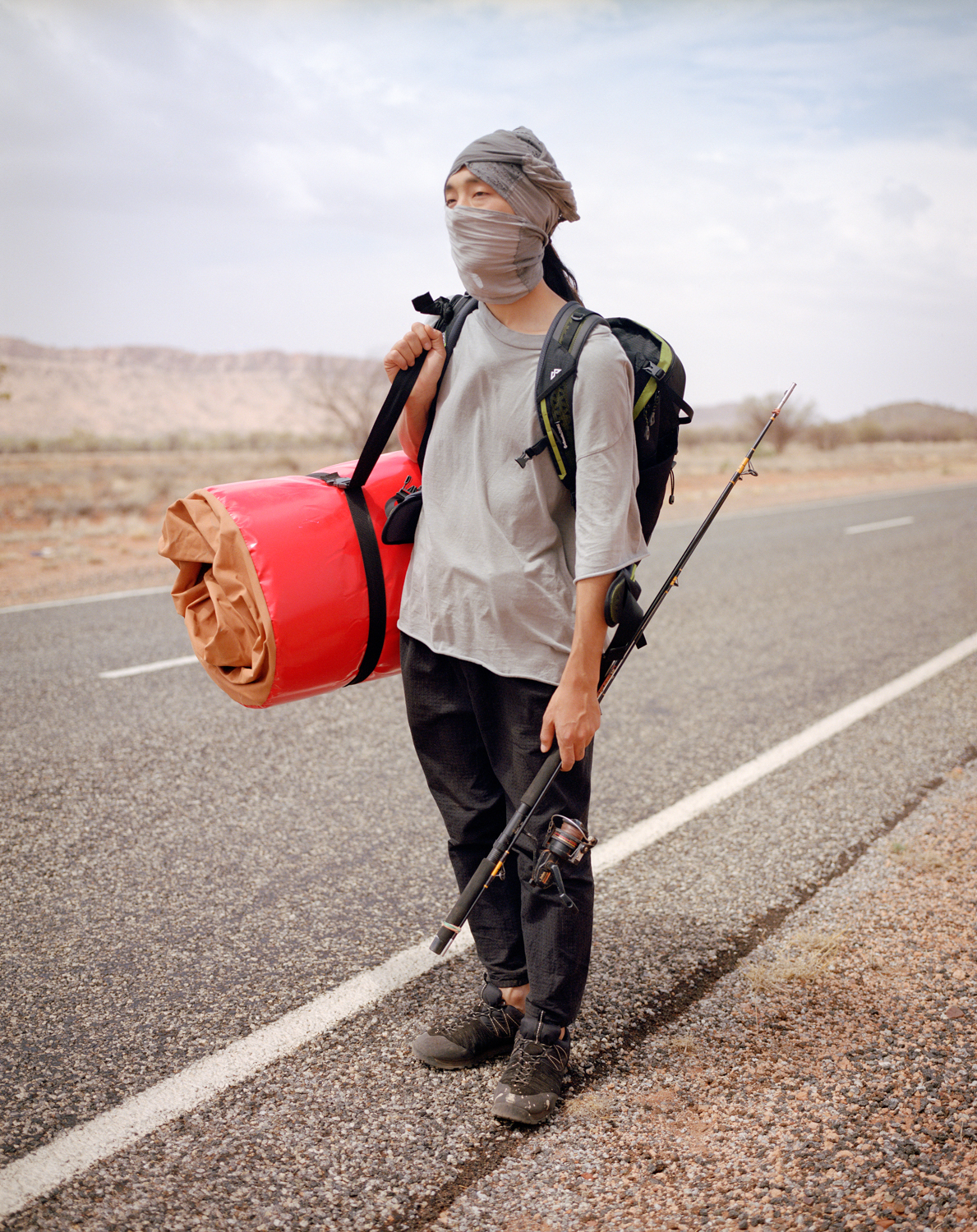 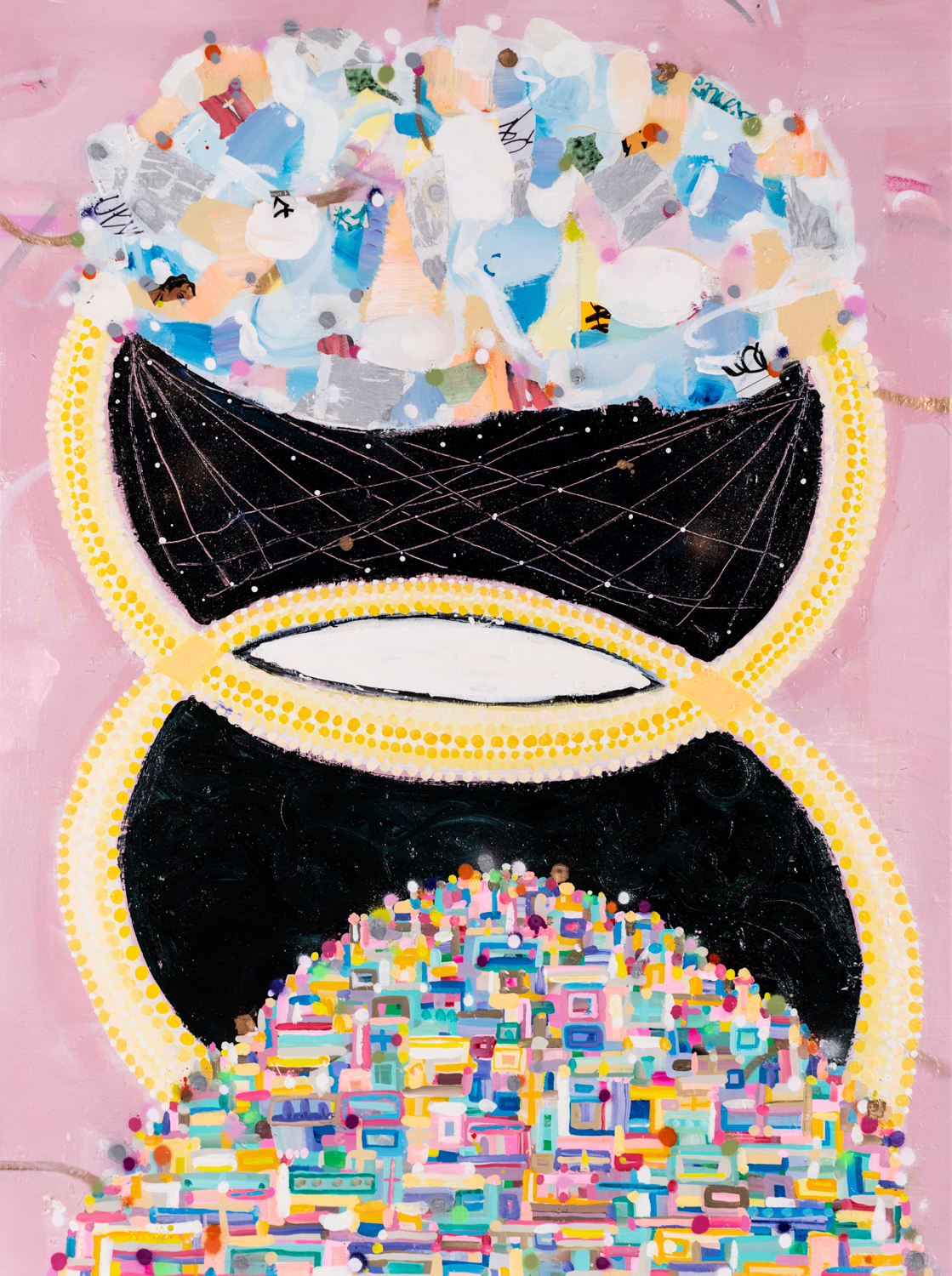 No items found.
Milky Way with its million stars

‍It was 11 am in the morning, and the day was warming up. Red dust filled the air caused by strong westerly winds. I was waiting at the Alice Springs airport to meet an artist from Japan who was interested in Aboriginal culture and who wanted to explore Central Australia. I had come from Melbourne several days earlier to arrange the logistics so we could leave town and go bush the following day. Masaho Anotani arrived with a film crew holding their camera gear and sound equipment. There was more than enough luggage and with their swags I thought it was going to be a rather tight squeeze to fit everything into the rented four wheel drive Ute. First impressions are always important, Masaho was carrying a fishing rod. I thought, oh dear, does he know we are in the middle of Australian desert? Perhaps it’s a prop, a metaphor for his art practice. There are small native fish in most of the waterholes between the gorges but catching them is strictly prohibited. I imagined I would have some explaining to do if the park rangers saw Masaho walking towards a waterhole with a fishing rod. We greeted each other, loaded the vehicle with various bags and drove out of the airport. I asked Masaho what he would like to see. He had one simple request, ‘the stars’ I thought this is going to be easy, you can see them every night.

The smoke cleared and the magnificent West Macdonnell ranges (Tjoritja) glowed red against the impossibly blue sky as we drove through Heavitree Gap and into Alice Springs. We discussed the week’s itinerary over lunch; Masaho was an intelligent young man, he had a sense of humour, was eager to learn and desperate to see the landscape. He asked many thoughtful questions, and was excited to be here. I was impressed by his enthusiasm. That afternoon we travelled to Standley Chasm (Angkerle Atwatye) a spectacular narrow gap in the ranges most dramatically viewed around noon when the sun is directly overhead. The breathtaking red walls of the Chasm rise eighty metres above the floor. Unscripted, Masaho standing at one end of the chasm began to hum sounds which somehow suited the geography. Using his voice as an instrument he made the chasm sing as his sounds bounced off the surrounding rocks. Was this ‘sound art’ or a performance piece? It wasn’t long before the local birds joined the chorus.

Locked and loaded with supplies and plenty of water, we left Alice Springs early the next day. Following Namatjira Drive and heading west we stopped at Ellery Creek Big Hole (Udepata) for a swim, visited Ormiston Gorge (Kwartatuma) with its near permanent waterhole and spent a couple of hours at the Ochre Pits which consist of many layers of multi coloured rock forming a small escarpment. In past times, the ochre was removed by the Aboriginal people, ground and mixed with animal fat and used for ceremonial body decoration. That evening we intended to roll out the swags in a bush camp near Haasts Bluff. However, the weather turned bad so we backtracked along the unsealed road to Glen Helen where we spent the night. I mentioned to all that even the best laid plans can be scuppered by the weather. That night low clouds prevented anyone from seeing the stars.

The following morning we drove past Gosses Bluff (Tnorala) to the community of Hermannsburg (Ntaria), visiting the famous pottery and the historic Lutheran Mission. Later we journeyed down the dry Finke River through the Krichauff Range and into the spectacular Palm Valley. After meeting Aboriginal people Masaho questioned his idea that what can be hypothesized and tested can be true. He learned about their Dreamtime, (Tjukurrpa) and how it is sacrosanct. Tjukurrpa is a paradigm like art or law or science, it gives order and meaning to Aboriginal society; it explains how Aboriginal people came to be and details their spirit ancestors responsible for the creation of everything. Hearing their strong beliefs he realised that the metaphysical world seemed quite plausible. Their Tjukurrpa is not a metaphor, it exists.

After setting up a rough camp we explored Palm Valley. Keeping to the designated track we walked the ancient river bed, through deep canyons and gorges of unsurpassed grandeur sheltering a diverse range of plant species. Masaho dressed like a Koga Ninja from the Adventures of Shintaro the Samurai, he wanted every step documented and filled a sketchbook as he walked. The sun shone brightly but dark clouds were gathering on the western horizon. We passed stands of magnificent palm trees; their tall trunks curling towards the sky. Occasionally a rock wallaby dashed between the rocks and disappeared. Further down the gorge the valley opened into a primordial amphitheatre, we continued to walk and then climbed up the escarpment and rested under a rock ledge, the view was magnificent. As we sat the wind dramatically increased and the weather looked very threatening, we were half way through a three hour trek and about to get rained on. A decision was made to move as fast as we could and to out run the impending storm; we failed and got very wet before we reached the vehicle.

Water quickly and silently filled the usually dry creek beds, awakening the desert from its slumber. Soaked to the skin our main objective was to load the vehicle again and drive out of Palm Valley before the rising water made it was impossible to do so. Wall Black Hole, 2019, is perhaps Masaho’s interpretation of this event, the rush of adrenalin and the sense of nature seen at its most dynamic. After a three hour drive, the late afternoon was enjoyed in Alice Springs cooking Kangaroo tails on the open fire and looking at Aboriginal art. Masaho discussed stories with local artist Jorna Newberry and learned about the social structure which guaranteed the continuity of Aboriginal being. The evening brought a magnificent red sunset, but again the sky was overcast and there were no stars.

While travelling the outback roads Masaho collected interesting objects, some he fashioned and wore as ornaments, some he just photographed, but all were important material for his artistic practice. His objective was to create a visual dialogue between Japanese and Australian culture, between oriental craft and the art of a people who successfully devised a way of life well suited to the harsh country they lived in. With a colourful palette his paintings in this exhibition are metaphors for translation.

Dot paintings are internationally recognised as unique and integral to Australian Aboriginal Art but the dot has been used in art by many artists, particularly by Yayoi Kusama, one of the most important artists to come out of Japan. Stream Screaming Dream, 2019, is an imposing composition with boundless imagination. Masaho explores the mythology of both Indigenous and white man’s legends. He paints two overlapping harmonious curved rings of dots, is this painting a topographical map? Is it his way of interconnecting two countries and two cultures? Within the confined perimeter of these curved rings, two night skies are visible. One sky is without stars, painted above a multi-coloured mass of shapes, perhaps this is Tokyo shown as a metropolis bustling with activity. And one sky full of stars, perhaps Alice Springs?

Masaho Anotani is a modernist; he sees things differently and therefore offers us new truths, new understandings of the complexities of both the real and the imaginary. During his stay in Central Australia he experienced a culture alien to him. He witnessed dust storms swept across the landscape and watched rain pour down regenerating the drought-stricken country which is beautifully depicted in, Sun Blowing and Shadow, 2019. An extraordinary luminosity emanates from this work. On the final evening while sitting around the camp fire Masaho preformed again, his sounds disappeared into the silent night sky, the clouds had disappeared and he saw the Milky Way with its million stars.